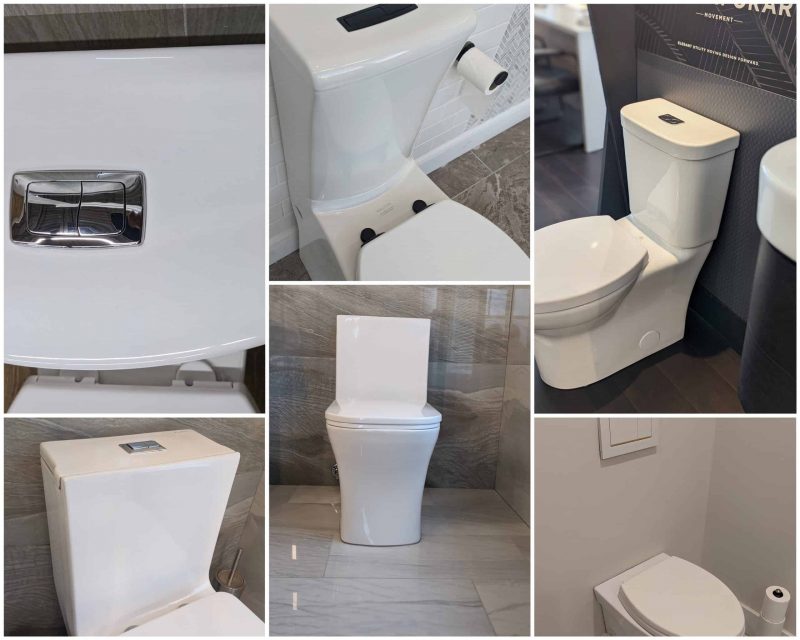 Due to the recent movement toward greener solutions in the bathrooms, Dual Flush toilets have been steadily growing in popularity.  They save water by giving the user a choice between full flush & partial flush. You get to save water and have the choice of a powerful flush as well.  This sounds like the best of both worlds.

While dual flush are getting more and more popular, they have not necessarily taken the industry by storm.  This is because this type of toilet comes with its own set of drawbacks.

In this article we will dive deep into the pros and cons of dual flush toilets so you can make an informed purchasing decision.

What is a Dual Flush Toilet?

A dual flush toilet is a toilet that offers the option of two flushes instead of the standard single flush.  You can easily spot them, as they are often equipped with a 2 button top flush, rather than the typical side mounted lever handles.

While manufacturers are free to set their own Flush volume within federal guidelines, most opt for a 0.8 gpf (Gallons per flush) on the reduced flush & a 1.28 gpf on the full flush.  In comparison, most standard toilets today are equipped with a single 1.28 gpf option.

When they were first introduced in the US, the reduced flush was called a “half flush” because the standard full flush at the time used to be 1.6 gpf.  Since toilets flushing technology have gotten more powerful & more efficient over the years, 1.28 gpf has become the default standard for full flushes.

Pros of a dual flush toilet

The pros of dual flush toilets are quite obvious & straight forward.  There are 3 main advantages, and while they are not numerous, they are quite significant and often outweigh the cons in many instances.

This is the reason why most people opt for a dual flush toilets.  While the savings are dependent on individual use & habits, dual flush toilets are watersense certified.  Watersense estimates that toilets that meet their specifications will save the average homeowner between 20-60% over the alternative.

2. Dual Flush toilets are better for the environment

The EPA estimates that toilet flushes account for 30% of household water consumption.  This would place toilets second only to showers amongst fixtures that consume the highest amount of water per day.

If we are able to achieve mass adoption of dual flush toilets, we have a chance of making a significant dent to the water consumption issue.  With that said, buying & installing a dual flush toilet is only half the battle,  we must also use it as it was intended in order to make a significant dent.  Choosing the appropriate flush is a step that can only be achieved by changing our habits.

3. They most often have a clean modern design

While this is not true of all dual flush toilets, the vast majority of them have dual flush button on top of the toilet tank.  This is different than the side mounted lever seen in most traditional toilets.

This is a major advantage because this design has caused the dual flush toilets to become more and more popular as American home interiors  are moving to a more open minimalist look.

There are quite a few drawbacks to the dual flush toilet.  However they tend to be either minor or issues that are slowly being resolved as these toilets are becoming more mainstream.

1. Flush are less powerful than the top tier toilets

While this is improving, most dual flush toilets have subpar flushing system compared to other toilets from top manufacturers.  This is actually documented by MAP testing, a third party entity that focuses on grading toilet’s flushing system.

Reputable brands, like Kohler, American Standard & Toto carry a number of toilets that have a MAP rating of 1000, the highest achievable score at this time.  However, most of their dual flush toilets have failed to score higher than 800.

The good news is that this has been improving recently.  DXV (American Standard’s premium brand) was able to achieve a score of 1000 with the DXV Equility a few years ago.  Since then, American Standard has added a number of dual flush toilets with the top score. We can only assume that this number will keep going up in the foreseeable future.

Toto has recently followed suit as some of their collections have aslo achieved a score of 1000.  While this is promising, the vast majority of their dual flush toilets still have a score of 800 or lower.

2. There is a lack of traditional style toilets

If you’re looking to put a dual flush toilet in a contemporary style bathroom, there is no shortage of options available.  However, the same can’t be said for traditional style toilets.  Toilet manufacturers still see the dual flush consumer as someone looking for a minimalist modern decor..

One reason for the lack of traditional style toilets is the fact that dual flush toilets are typically equipped with a top flush button.  Buttons lend themselves well to a more techie style design.  The good news is that this is changing as manufacturers have started to introduce the lever style dual flush.

With this type of dual flush toilet, an up swing of the lever indicates a half flush, while the standard down swing is reserved for a full flush.  With this sort of flushing mechanism, manufacturers will be able to offer dual flush systems to their popular classic collections.

3. Flush Buttons are not as durable as Flush levers.

Flush lever handles have been around for decades.  The majority of American homeowners have not experienced anything else.  As a result, it’s a tried and tested mechanism that has very few drawbacks.  There are a bunch of different variations from side mounted to front mounted.  Repair parts are available in just about any hardware or plumbing store.  If your toilet happened to come with a cheaper plastic version, you can easily replace it with a more durable version.

The same can’t be said for dual flush buttons.  These buttons are proprietary to their own manufacturers.  You’d be hard pressed to find a third party that makes cheaper parts for your specific toilet.  In addition, these parts are not readily available at your local plumbing store and that’s even true for well known brands like Kohler & American Standard.

Lastly, these dual flush buttons tend to wear out quickly.  Most of these buttons are made of plastic parts with a chrome film to give it that metal look.  The downside to these materials is that the film starts to wear off and becomes an eyesore in your bathroom.  There are also reports of the buttons getting stuck in certain manufacturers.  While these issues are getting improved on, there are still too many issues compared to your standard flush lever toilet.

Now that we clearly knows the pros and cons of dual flush toilets. It’s time to look at some toilets that meet most of the pros and mitigates the drawbacks. Below is a list of the top 5 Dual Flush toilets we would recommend.

The DXV Equility is the perfect dual flush toilets. It has a everything we come to expect from a modern day dual flush toilet: Modern look, seamless design, a fully skirted apron along with its dual flush functionality. However, the one feature that sets it apart is its powerful flush. DXV & American Standard are known for the powerful Cadet flushing system and they were able to add this same award winning fucntion to their dual flush toilets. As a result, the Equility was one of the first toilets to receive a 1000 MAP score by www.Map-Testing.Com, a well respected third party industry standard.

We must note that many manufacturers have since caught up with DXV in that department. Its sister brand American Standard & Toto now offer several dual flush toilet models with 1000 MAP score. However the Equility is #1 on our list for offering the complete package.

The Equility is available in one piece or two piece versions. It’s also one of the few toilets that offer both top flush buttons & side lever versions.

While DXV was the first to achieve 1000 MAP score for a dual flush toilet, Toto has since joined them & have added a few dual flush toilets with the highest possible score. The Toto Maris is one of these toilets. It’s one of two Toto toilets on our list. The second being the Toto Drake Dual Flush. The Maris is the better looking toilet with its clean line and attractive design. However, this design comes at a cost. The Maris lists for more than $1000 price. That’s especially expensive considering it’s a two piece toilet.

The Duravit is the only toilet on our list with a sub 1000 MAP score. This is because it’s the only one of its kind. Duravit is a German brand used to making toilets with a European style bowl. Unlike American toilets, European style toilet bowls do not follow a set standard. Therefore, their toilet seats can only fit on the toilet it was made for.

While the European bowl’s lack of compatibility is a nuisance, the skirted bowl tend to be more attractive and often have a wider base which makes for a more comfortable seating experience.

The Durastyle is the clear winner for Duravit as it offers the best value for the money. Its two piece version often retails under $500 with the seat.

If you want a modern looking entry level dual flush toilet, the American Standard Cadet should be at the top of your list. It’s an affordable dual flush toilets with top mounted buttons. While it’s not as clean looking as the DXV Equility, it more than makes up for it with its retail price.